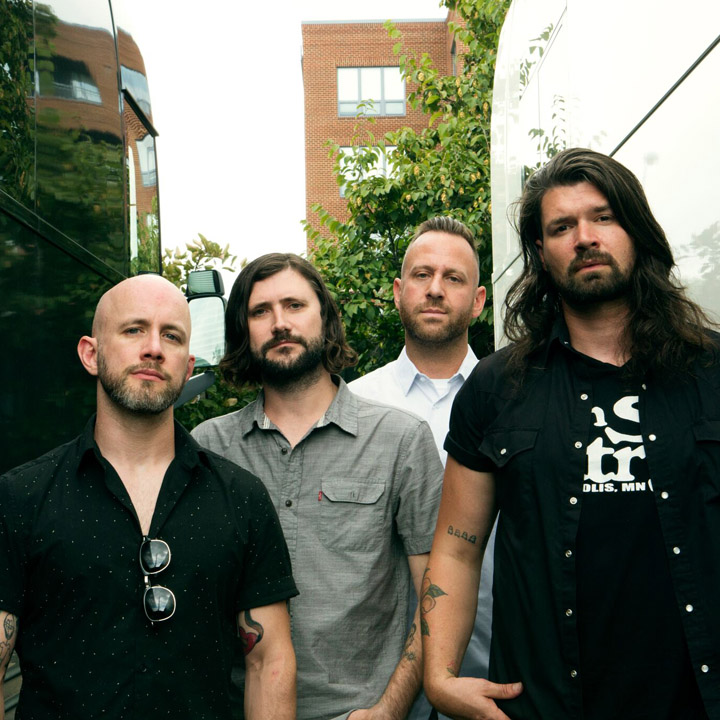 If you can't believe that Taking Back Sunday have been around for 20 years, you're not alone, because they can't either. Although the pride of Long Island have had a handful of member changes over the years, the current lineup of the band -- vocalist Adam Lazzara, guitarist John Nolan, drummer Mark O'Connell and bassist Shaun Cooper -- have all been there since the beginning. From the band's landmark 2002 debut Tell All Your Friends to their most recent full-length, 2016's Tidal Wave, Taking Back Sunday have evolved from a key player in the early 2000s emo scene to a genre-defying rock band who have three gold albums without ever ceasing to push the limitations of their sound. This fact is evidenced on Twenty, a 21-song collection set for release in January 2019 via Craft Recordings that spans all seven of their full-lengths and solidifies them as an act with a catalog that will undoubtedly outlive them. By now you know the basic history of the band, so we thought it'd be apt to look back at the fact that almost none of it happened...

"When I joined Taking Back Sunday in 1999, it was the first real band that I had ever been a part of, but it never crossed my mind that I would be doing this twenty years later. When I came in to audition it was just [original vocalist] Antonio [Longo] and [founding TBS guitarist and former Movielife member] Eddie Reyes. Eddie had started enough bands that he was like, 'I know how to do this, I can just call one guy.' But it was a crazy thing. When it started out, there was a lot more likelihood that it would fizzle out in a few months than it would last a few years. I tried out, and basically after we jammed for a couple of hours Eddie was like, 'All right, you're in. You have to get some different equipment though... and I'll sell it to you.' I think he sold me a head and cabinet for $200 [that] had to be worth at least $600." - John Nolan

"My entry into the band is pretty interesting. One day my brother said, 'Hey, my friend is looking for a drummer and he wanted to know if you wanted to try out.' But once I realized he was talking about Eddie, I had second thoughts. I remembered Eddie was the jerk who would yell at me and Shaun and all of our friends in front of Shaun's house when we would hang out there because he would be going to Movielife practice. So I said, 'No, I don't want to play in a band with that guy.' Then maybe two months later Shaun and I were hanging out [with] my mutual friend at a restaurant where Antonio worked and our friend said, 'Yo, my boy needs a drummer for his band if you want to try out.' The first song I heard was 'Go On' and I was like, 'Wow, this definitely has a lot of potential,' so I agreed. On my first tryout I remember walking in and seeing John, Antonio and then guess who's there? Eddie Reyes. I was like, 'Oh, what's up, man? How are you doing?' That was it." - Mark O'Connell

"I didn't know anyone in Taking Back Sunday initially; I just knew who Eddie was because some of the bands from Long Island would play in North Carolina. I had just moved back to Greensboro from Wilmington and I didn't really have anything going on aside from delivering Chinese food, so I really wanted to be playing music. I ended up in a booth with Eddie and Antonio at the after show hangout spot, Waffle House, after an ill-fated Sons Of Abraham show and heard they needed a bass player for their new project. They said, 'Yeah, you should come up.' A couple of weeks later me and my friend Chris drove his 1988 Honda Accord up to New York, I tried out and then drove back. A few weeks later I got a call from Eddie [who] said, 'If you want to do this, we have some shows coming up.' So I flew to Long Island and never came back. Looking back now it's funny because I was like, 'I'm moving to New York, it's going to be so sick.' Then I moved to Long Island and it was kind of a bummer. It was just like North Carolina... only way more crowded." - Adam Lazzara

Mark and I have played in bands together as long as we've known each other, which is over 30 years. When he joined Taking Back Sunday, I begged him to get me a bass audition. At first Mark told me that since I was so unreliable in our previous bands that he couldn't vouch for me, so I got serious, enrolled in night classes at a local college and tried to get my act together. About a month later, Mark noticed a change but sadly some kid from North Carolina was ditching everything he knew to move to New York to play bass in the band. Adam was a good bass player but he had a manic, magnetic energy on stage that everyone in the crowd was captivated by. Suddenly Antonio was out and Eddie made Adam put down the bass and grab a microphone. Mark got me a tryout for the band December 26, 2000. I played along to the demo day and night, made myself fall in love with those songs and played my first show at our friend's house a few days later on New Year's Eve. - Shaun Cooper

The rest is history. Taking Back Sunday may have started out like most of their peers by playing local shows and recording demos; however, unlike most of those peers they went on to sign to a major label, tour alongside Linkin Park and become international superstars. That said, they still speak of the band's early days as if they just happened yesterday. "I'll never forget, we played Ground Zero in Long Island in 2001 and it was the first show we played where people were singing along and going crazy. It was a tiny place that held 100 people but you could sense something had changed," Lazzara recalls. "After the show I remember we carried some equipment back to John's car and we were sitting in it just not saying anything. We were just thinking, 'that was the best thing ever.' I was starry eyed and staring into space; I couldn't believe that just happened." Nolan concurs, adding, "Even after the band got a lot bigger and did things that were a lot more impressive, that moment was really huge because you could tell something was happening. Everyone was going nuts and that really stands out to me as being one of the defining moments of Taking Back Sunday."

Twenty is a celebration not only of those career-defining moments but of the landmark albums that chronicle the band's story: 2002's Tell All Your Friends, 2004's Where You Want To Be, 2006's Louder Now, 2009's New Again, 2011's Taking Back Sunday, 2014's Happiness Is and 2016's Tidal Wave, all of which are represented on this collection. Whether your introduction to the band was singing along to "A Decade Under The Influence" in a sweaty club or hearing "MakeDamnSure" or "Sink Into Me" on the radio, Twenty is a look back at some of the highlights from this unlikely group of musical misfits. Additionally, fans will be able to hear two newly recorded songs, which hint at the direction that Taking Back Sunday are heading in the coming years. Musical legacy aside, ultimately what's most impressive is the fact that after two decades and countless successes, Taking Back Sunday have managed to preserve that initial spark that excited them as teenagers.

That fact alone is one worth celebrating, so turn it up and listen loud.