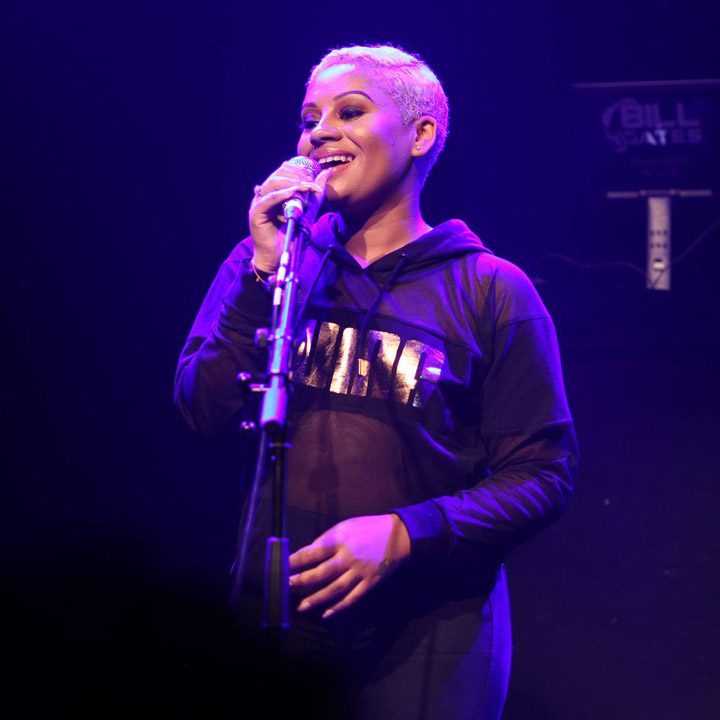 Rebecca Garton is at a pivotal point in her career. Armed with a new EP of songs that span Afrobeat, R&B and pop influences, and recently co-signed by one of her heroes, Wiley, she should be in a place of giddy enthusiasm. But the laidback singer is taking things in her stride. Affable and honest, the Ghanaian born musician exudes wisdom, a unique kind of emotional intelligence. “Well, I have read over 3,000 books,” laughs the now London-based singer when I put this to her (she later admits to being a fan of everything from crime fiction to the Harry Potter series). “And then there’s the fact I’ve lived in so many places, I think when you move around that much, you really learn a lot of different things about the word”.

It’s no understatement. Born in Ghana to a native mother and British expatriate father, Rebecca then moved to Nigeria when she was just one week old. She comes from an especially musical household, her father; an avid fan spent his spare time as a composer. “He used to collect vinyl, he’d play anything from the Beatles to Fela Kuti or Whitney Houston. He loved Celine Dion, Aretha Franklin, Jazz artists like Miles Davis. Music was always playing in our house.” Rebecca’s older sister is also a musician, the Afrobeats artist Lola Rae. Having grown up in such a unique household, consuming a wealth of different genres came naturally to Rebecca. “In Africa they love Bashment and Dancehall and I loved listening to those songs with my friends. Old school R&B was really big too – Ashanti, Ja Rule, Kevin. But it was the music my Dad used to play that effected me the most” she explains.

With friends, Rebecca often entered local talent shows, but it wasn’t until she moved to the UK, aged 17, that she realised being a musician could be more than a pipe dream. “In Nigeria everyone I was around, we were all told we would grow up and become a lawyer or a doctor, then get married and have kids. That’s what I thought my life was going to be. Coming here I realised that it didn’t have to be.”

Arriving to Kent as a teenager, Rebecca was struck by another kind of music: grime. Loud, urgent and dominating the UK’s underground music scene, it was new and exciting and felt whole-heartedly British. “Artists like Wiley and Ghetts really blew me away” she says. “At first I didn’t understand what they were saying because it was just so quick. To this day, I still really love grime.  And now I see artists like Stormzy and Wiley and Skepta going to Africa to perform. That really brings it home for me.”

Moving to the other side of the world wasn’t all plain sailing. Rebecca knew she’d experience culture shock, but she didn’t expect to be a regular target of heinous acts of racism. “I would get a lot of racial insults yelled at me while I’d be walking down the street. I wasn’t used to anything like that, it was this massive reality check. I lived close to Eltham, which was where Steven Lawrence got killed. In the beginning I hated it, I wasn’t used to the culture, the people weren’t as friendly as back home. I’d act out a lot because it was just too much.”

Determined to succeed and armed with an eclectic mix of influences and experiences, she grew increasingly ready to launch her own musical career. In 2014, Rebecca posted an acoustic cover of Emily Sandé’s Break the Law. It’s since amassed almost 5,000 views, while her stripped back, Sade-like vocals attracted a flood of positive attention and soon led to a management deal. With a renewed confidence, Rebecca performed a small show in Brixton and began studio sessions with a producer. Before long, key industry players got wind of her talent, including Krept and Konan, who asked Rebecca to lend her vocals on their seminal 2015 album, The Long Way Home. She ended up collaborating on three songs, Wait Up For Me, Fell Apart / Lucky Ones and I Don’t Know. The same year, she was booked to support August Alsina at London’s Indigo O2, her biggest show to date.

Just as things were taking off and Rebecca was beginning to find her feet as a musician, tragedy struck for a second time. After a battle with cancer, her father passed away. The inspiration behind her music career and a lifelong mentor, his death hit Rebecca hard. “When he first started getting sick, he always said to me, ‘make sure you do this, ’” she explains.  She took some time out, but in 2016, began work on her debut EP, Take Me Home, five tracks which showcase her brilliance and versatility as an artist. Typa Way is a sultry salute to female empowerment, sonically reminiscent of Amerie or Jhene Aiko, while Take Me Home brilliantly marries Rebecca’s multicultural identity. In it she balances a smooth R&B refrain with the influences of traditional African styles.

“I’d never properly explored an Africa sound and it’s something I really wanted to do,” she explains. “Africa is still home for me, and I wanted people to hear it. Home can mean so many different things to people, to me, home is where my dad is, he’s my home, and home is also Africa. I start talking about yam and okra because they are some of the staple foods where I’m from. I wanted to make it playful but still with meaning behind it.” On the verge of releasing her EP, Rebecca is already commanding attention. She has a growing fan base, which happens to include godfather of Grime, Wiley. The MC has repeatedly shared Rebecca’s music on Instagram. “I met him a month ago for the first time at an event” she says. “You can tell he just loves music and wants to push the UK scene. He’s a lovely person, he told me he was waiting for my music to come out”. It seems like he’s not the only one.