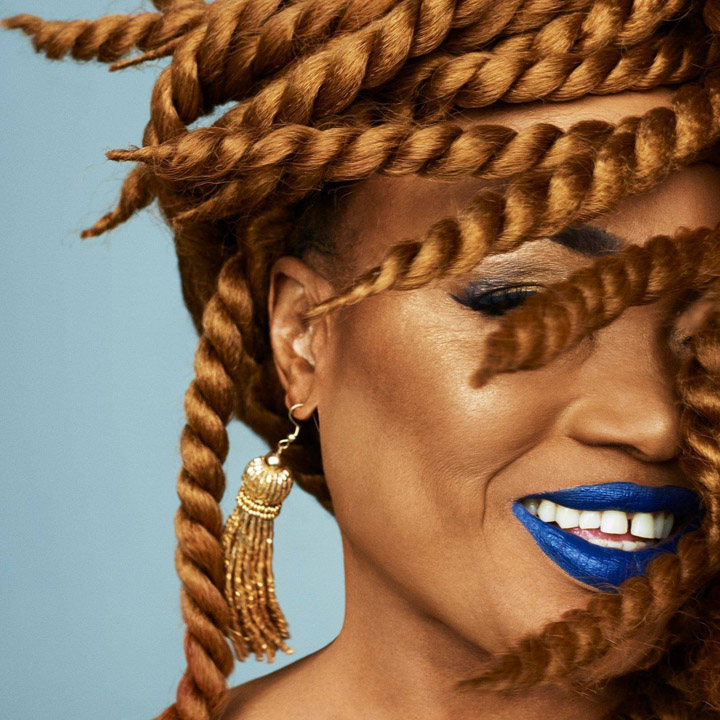 It's eight years since Oumou Sangaré last released an album of new material and much has changed since we last heard from the greatest living female voice in African music.

The power of her voice and the potency of her message remain inviolable but with a new label, an all-new production team and a vital new set of songs, her latest album Mogoya (it translates roughlyas 'people today') represents an exciting new chapter in Oumou Sangaré's storied career.

While her sound remains rooted deep in the continuity of Malian tradition, at the same time this is Oumou as we have never heard her before. Recorded in Stockholm by Andreas Unge, and produced in Paris with the crack French production team A.L.B.E.R.T. (Vincent Taurelle, Ludovic Bruni and Vincent Taeger), Mogoya is a record that both draws upon a rich musical heritage and looks to the future.

Traditional African instruments such as the kamele n'goni (harp), karignan (metal scraper) and calabash percussion are augmented by electric guitar, bass, keyboards and even synths while Tony Allen, once Fela Kuti's band leader, guests on drums.

"We wanted to emphasise the raw power of Oumou's voice and songs and to avoid the glossy smoothness of so many current African productions," says Ludovic Bruni, who with his co-producers Taurelle and Taeger, has worked with the likes of Air, Charlotte Gainsbourg, Beck and Franz Ferdinand. "We wanted to find a new modernity."

It's only the fifth studio album since Oumou's spectacular debut announced the arrival of an audaciously fearless new African voice some 27 years ago. But Mogoya sounds and feels like a career defining moment, the rich fruit of hard-won experience over a life spent confronting prejudice and obstacles -- and triumphing over them.

"This album is the result of many years of work. I've collaborated with many people and I've been able to observe people's mentality," Oumou says. "This time around I wanted to go for more of a modern sound, to satisfy young people in Mali, but being careful, all the while, to respect my culture and my tradition."

Stylish, elegant, feisty and charismatic with a soulful, soaring voice, Sangaré has become an emblem for African womanhood and makes a striking role model. Born in 1969 in the Malian capital of Bamako, the moment which she defines as shaping her career occurred when she was just two years old. With her mother, Aminata Diakité, struggling to bring up a brood of small children and pregnant with another, Oumou's father took a second wife, abandoned his family and emigrated to Côte d'Ivoire.

Her mother, a singer who made her living performing at traditional wedding ceremonies and baptisms, sank into a deep depression at this desertion. But it also made her "a fighter," a quality Oumou inherited in abundance along with her mother's singing talent. By the time she was five, mother and daughter were singing together and by the age of thirteen, Oumou had become the family's main breadwinner. "That's what has given me strength in my life," she says. "It was a very hard childhood and it gave me an incredible character. I can face up to any obstacle."

The years of poverty and sorrow also informed her music and throughout her career she has used her songs to campaign fearlessly to improve the position of women in Mali and to oppose polygamy, child marriage and a system that defines a 'good wife' as a submissive woman. "Ever since I was a kid, I promised myself that one day I will scream about this problem to the whole world," she says.

It was no coincidence that her first album was titled Moussolou (the title means 'women'); or that her next album, Ko Sira, included a song titled "Dugu Kamalemba" (which translates as 'the skirt-chaser'); or that the title of her third album, Worotan (meaning 'ten kola nuts') was a reference to the price of a bride in an arranged marriage.

She also wrote "Magnoumako" ('Agony') about her mother's suffering, "how she wept, how she was marginalised, how she was ignored, how she struggled," The song appeared in 2003 on the compilation, Oumou. "How can an African woman hear that song without crying?" she asked at the time.

Her mother's spirit continues to inspire her music and one of Mogoya's key songs is "Minata Waraba" ('Aminata the Lioness'), a tribute to her maternal courage and resilience. "Women have a hard time in Africa. We have no voice; our men do all our talking for us," Oumou says. "My role is to speak directly to women both through my songs and setting an example and showing them that they can make their own decisions. I was the first one who started to speak out about correcting the inequalities and injustice that women still endure in Mali."

Although born in Bamako, Oumou's parents came from Wassoulou, a wooded region in southern Mali, which straddles the borders with Ivory Coast and Guinea, which she regards as her cultural and spiritual home. The region boasts a rich and distinctive tradition based around the special place in village life afforded to the caste of hunters, whose hypnotic, rhythmic music played on the kamele n'goni has from the outset exerted a powerful influence in Sangaré's music.

"People couldn't believe my music. They would say 'what she sings about is heavy. She's denouncing polygamy, she's encouraging women to stand up to their husbands, she's got guts,'" Sangaré recalls. "It was a kind of music revolution. Every household in Bamako had a copy of that record and my mother was so happy that she cried."

The album was released outside Mali a year later on World Circuit, marking the beginning of a long-association with the label, for whom she went on to record three further albums between 1993 and 2009.

The long gaps between record releases were largely due to her heavy touring schedule. On the international stage she won the UNESCO International Music Prize (2001), became a Goodwill Ambassador for the United Nations' Food and Agricultural Organisation (2003), collaborated and recorded with Bela Fleck (2010) and Dee Dee Bridgewater (2007), duetted live on French TV with Alicia Keys (2002) and featured on the soundtrack of Beloved, the film based on Toni Morrison's novel and starring Oprah Winfrey (1998).

At home she built a significant business empire, owning and running a hotel, launching a range of 4×4 pick-ups and SUVs called the 'Oum Sang' in partnership with a Chinese manufacturer and marketing 'Oumou Sangaré Rice,' proudly grown in her own fields.

After more than twenty years with World Circuit, she describes her move to the Paris-based No Format! label as "a bit nerve-wracking" but one she feels she had to make in order to expand her horizons and find a new energy.

"When we had the opportunity to sign Oumou, it felt like an exceptional chance," says No Format! founder Laurent Bizot. "It was difficult to better the World Circuit albums by working in the same genre, so our concept was to seek a new sound and direction, keeping the magic of the Wassoulou melodies and traditional instruments but finding a harmonious marriage with more contemporary sounds."

She approached the project, he reports, with a mixture of boldness, humility and confidence that are the hallmarks of a supreme artist.

"It was new for me, because my music has never had this kind of arrangement and sound before," Oumou says. "I've been totally in the tradition for years now so to get out of that and have a look around elsewhere was a total pleasure."