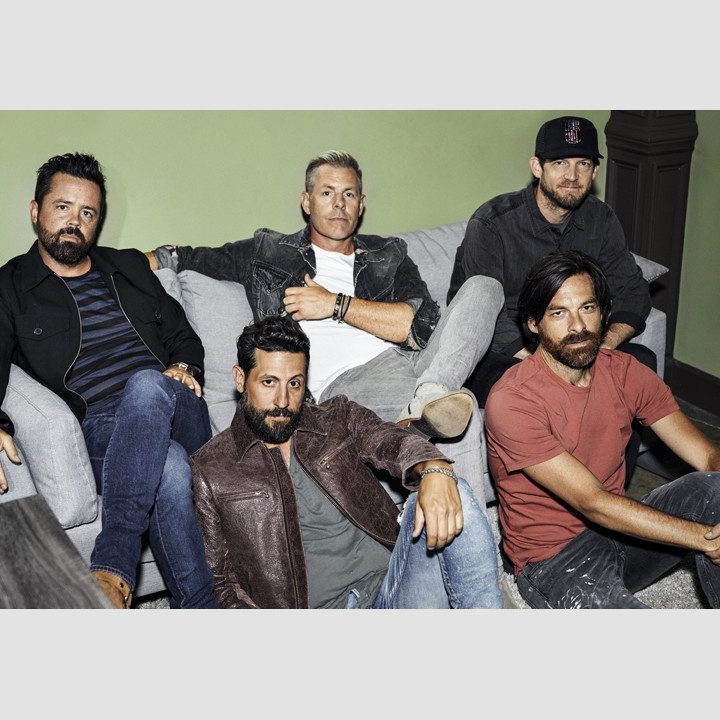 Back when Matthew Ramsey was a teenager, and falling increasingly ever more in love with music, nothing was so exciting to the blossoming singer-songwriter as hanging in a garage with his buddies and jamming out until a fully fleshed song revealed itself. “That was just such an amazing feeling,” the Old Dominion frontman recalls with childlike wonderment. So infectious was that feeling and practice to Ramsey that he's carried it with him to the present day: “It’s so incredible be able to sit in your room with your instruments and your bandmates and feel that chemistry and follow it wherever it goes,” the singer says of the tight-knit way he and his globe-dominating band -- which includes singer-guitarist-songwriter Matthew Ramsey, guitarist-songwriter Brad Tursi, bassist Geoff Sprung, keyboard-guitarist Trevor Rosen and drummer Whit Sellers -- have forever believed that at the heart of their massive success lies their collaborative spirit and, to that end, have crafted each of their acclaimed albums and chart-dominating singles as a truly cohesive unit.

It’s certainly proved a winning method: since breaking onto the country music scene in 2014, Old Dominion -- recently recognized as the “Group of the Year” at the 2019 ACM Awards -- have notched seven Number Ones at country radio, surpassed one billion on-demand streams, singles “No Such Thing As A Broken Heart” and “Written in the Sand” earning platinum certifications and “Hotel Key” earning a gold, from their gold certified sophomore album Happy Endings,. and headlining arenas and amphitheaters across the globe on their super-successful “Happy Endings” and current “Make It Sweet” tours.

In early 2018, when Old Dominion regrouped to begin writing and recording what became their lyrically self-aware and effortlessly melodic stunning self-titled third LP, they once again fed off each other and their tight-knit relationship to craft their most striking songs yet. “We went in there with whatever instruments we happened to own ourselves, we wrote, we recorded and that’s what we sounded like,” Tursi recalls of the band's initial studio session for their highly-anticipated new 12-track album, due on October 25 via Sony Music Nashville. “It was just honestly so refreshing.” The five musicians that comprise OD -- the ones who navigated Nashville for a decade before breaking big earlier this decade; who cut their teeth playing bars together for years before their modern-day sold-out arena and stadium gigs; the partners who long ago realized their collective talents far outweighed what they could do on their own -- have always known they’re only as strong as the sum of their parts. Offers Rosen, “We’re a band of songwriters but more importantly we’re a true band.”

The group’s goal in entering the studio blind? To see what emerged when they collaborated in such a pure, honest and no-nonsense way. “And so we went into the studio to see if we could write a song and record it on the same day. All five of us in the studio old-school style with no plan,” Ramsey offers of their initial gameplan for the LP. A few hours later, Old Dominion had successfully brainstormed, written and recorded a breakthrough song: “Make It Sweet, one of the group’s most frank and sincere songs yet, and, as it would turn out, their latest Number One single. Looking back now on the early days of them piecing together their new album, a multi-day run that also saw them writing and recording the soothing kiss-off “Hear You Now,” the band says it assuredly kicked off the next chapter in their ongoing legacy and, more importantly, colored the creative palette for the entire album. “Those sessions quite simply set the tone for the whole album,” Ramsey says. “Everything felt right.”

It’s this collaborative spirit, and moreover the sense that these five men have now reached a point in their career where little else matters so much as joining forces to craft authentic songs, that defines their forthcoming eponymous LP.  Where they came out with guns blazing on their first two albums, the tracklisting for each a veritable wrecking crew of radio-friendly sing-along smashes, the band pulled back the curtain for their latest album and exposed a vulnerability that, while long lurking beneath the surface, had yet to fully reveal itself.  “We’re commercial-minded songwriters and the first album we were really going for that,” Ramsey admits of 2015’s gold-certified Meat and Candy. “That’s ingrained in us and that’s going to always be a part of us. But we’ve always been really good at hiding real messages and emotions in poppy songs. We’re not hiding anymore. Now we’re putting it all out there.”

To that end, Old Dominion, the group’s most honest, mature and forthright album yet, is defined by its creators’ openness and lack of pretense. It’s hard heard most notably on career-defining songs including the soul-baring piano ballad “My Heart is a Bar” and the effervescent rocker “Smooth Sailing.” And on the raw and genteel plea “Some People Do,” Ramsey sings like a wise man comforting his better half… or perhaps his younger self: “Some people decide to grow up/But it's never good timing/ Most wouldn't forgive what I put you through/ But I'm here tonight, hoping some people do.”

Of opening up in personal ways on this album that he now admits his younger self could never have fathomed, Ramsey says, “I listen back to these songs and it’s like I’m watching glimpses of my life. And that’s something I haven’t really been able to do much before. Yes, we’re having all this success and there are a lot of things going great for us but in the end we’re people and we’re struggling just like everyone. We have family issues and personal mental issues. This album has moments on it that are much more therapeutic to me as a person. And before I never felt like we were in a place to do that.”

The band members collectively agree only because they feel so embraced by their rabid and ever-growing fanbase did getting more personal on this album feel appropriate. “It’s obvious our fans genuinely love the music,” Rosen says. “It’s not ‘Oh, I know a few of those songs on the radio.’ No, they dive into the music with us. And that’s what helps create that community. They feel invested in this thing alongside us.”

As one of the most dynamic touring bands currently working, Old Dominion feel nothing short of incredibly grateful to share their work with fans every time they take the stage.

Said Geoff Sprung, “Our live shows definitely dictate how our albums have sounded and how they’ve progressed. That’s a big thing that happened on this last one too. Every time we go back in we’re leaning on the last year and a half or two years of playing together at least four or five times a week for all that time. Or when we are in the studio and are picking songs or are deciding how we are going to present those songs to our audience we are picturing the live show. We are going “How is this going to translate?” We got this huge set of training wheels when we started on the Kenny Chesney tour that 20-minute slot in those stadiums because all of a sudden we had the ability to visualize how our songs were going to be presented to 20 or 40,000 people at once. Will this effect people all the way in the back? Most bands at our level don’t get the chance to visualize that when you’re crafting the album or getting singles set up.”

“That’s the primary reason why we’re here,” says Sellers. “We make no bones about our journey to get here,” Ramsey adds. “That’s part of our entire show now. We sit down on stools and we tell people the journey we took from the beginning to where we are now. And it makes them feel like a part of it all right along with us.”