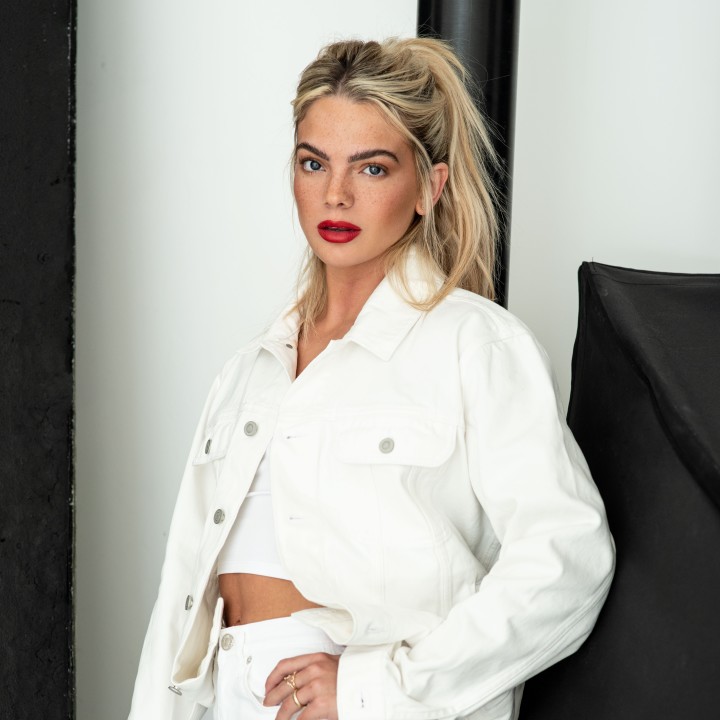 It’s easy to think you know someone when they’ve been in your living room every weekend for three months. But there’s far more to Louisa Johnson than met the eye when, at 17, she became The X-Factor’s youngest-ever winner — and she’s recorded an album to prove it.

Louisa spent 2016 working with a dream cast of writers and producers on songs that capture her infectious spontaneity (she’s still only 18) while also doing justice to a decade’s worth of work and determination. Coming along for the ride are artists like Clean Bandit and other special guests, as well as tunesmiths like Ali Tamposi (Justin Bieber, Beyoncé), Chelcee Grimes (Olly Murs), Burns (Britney, Calvin Harris), Ed Drewett (One Direction, Little Mix), J Kash (Maroon 5, Meghan Trainor) and Steve Mac (Jess Glynne, Charli XCX, Selena Gomez). The results are as varied as Louisa’s own musical tastes. “I don't just like one style of music,” she reasons, “so I didn't want an album where every song sounded the same. I wanted to mix it up.”

This is the latest chapter in a story that’s already longer than you might expect. Rewind ten years and you’ll find an eight-year-old Louisa performing at talent shows on family holidays, then being chosen at age eight for solo spots in school concerts. Louisa was born in Kent but she’d crossed the Thames when she was four, and grew up in Essex, where her first musical obsession was Whitney's ‘Greatest Hits’. Except Louisa didn’t just fall in love with Whitney’s songs. “I admired her tone and presence,” she remembers, “and I even studied her mouth placement. It was the same with Beyoncé: I’d immerse myself in her music, but I’d also watch her behind the scenes videos and read her interviews. I didn't want to copy her, but I wanted to understand how she did it. I knew something would happen to me one day, so I knew I had to get myself prepared.” A story Louisa’s mum sometimes tells is that one night at the dinner table, Louisa burst into tears. Asked why, she replied: "I just want to be like Beyoncé.”

At the age of twelve, Louisa took control of her own destiny by choosing to attend a secondary school known for its ability to nurture musical talent. “People would say to me, what do you do outside school?” Louisa recalls. “But I'd just sing. I'd sing after school, and even on my lunchbreak I'd go into the music room. I don't think I was supposed to be there, but I'd take my lunch in along with my favourite CDs, and I’d sing.” Inevitably some teachers were unsympathetic, and Louisa recalls one maths teacher being particularly sceptical of her chosen career path. (“I mean,” she says now, “I get the idea of being able to work out percentages, but nobody normal needs to know about Pi.”)

Louisa knew she had to prove doubters wrong but, as she explains, “I also wanted to prove it to myself. I needed to know that this thing that was inside me could somehow work.” By 16 she was releasing her own music and videos, and signed up to music college. “I’m an impatient person,” Louisa admits, “and I know things aren’t just going to fall in my lap — I knew I needed to make them happen. I figured I needed to get my name out and I didn't have a big social following, but I kept on posting my music and videos.” Gradually, and organically, she started picking up fans — including over 3,000 on Twitter. Then The X Factor happened.

At age 13 Louisa had applied for Britain’s Got Talent — she got four yeses from the judges, but so did too many others that day, and Louisa didn’t make it through to the next stage. Then in 2014 she got a call from one of The X Factor’s talent scouts, asking if she’d thought of applying that year. With no inconsiderable sense of restraint, she didn’t pursue that offer, having decided she wasn’t quite ready and that if she was going to get her one big shot she couldn’t afford to waste it. Then twelve months later she turned up at the X Factor auditions off her own back. “That one year made a huge difference,” she says now. “I felt like I'd grown. I had my own style, I felt confident. I was ready.” On the night her first audition was televised, Louisa saw a post on her Facebook wall from a familiar face — her former maths teacher. “He basically said: ‘I told this girl she couldn't do it. I was wrong, and I apologise. You've made me realise that if you have a dream you should do everything you can to achieve it’.”

After her X Factor win Louisa got to work. Her first post-X Factor release came a little earlier than expected, after Clean Bandit sent over a demo of a track they’d been working on. “Grace from the band said they’d first seen me when they were at a gig overseas watching The X Factor in the dressing room,” Louisa remembers, “and as soon as I heard ‘Tears’ it was an immediate yes.” One of that song’s first performances was at Wembley Stadium, in front of 80,000 people, on a bill that also included Ariana Grande and Little Mix. “That performance was a huge moment for me,” Louisa remembers. “I felt so lucky. But I also felt, for the first time, like this was actually IT.”

Louisa spent the rest of 2016 working on her debut album with a handpicked group of writers and producers. First song out of the gates was ‘So Good’, whose lyrics most of us recognise all too well: you’ve got to work the next day, but your friends convince you to stay out for just one drink. “Except it never ends up with one drink, does it?” Louisa laughs. “We'll always find somewhere that's open until 3am. And then of course the next day you're completely done.”

Louisa changes tone on the sleek, electronic ‘Best Behaviour’, then again on the more pensive ‘I Want Love’. ‘Roads’ is a song about the ambition that’s driven Louisa for a decade, as well as the family who’ve supported her. “It's about wanting to do all these things, and travel the world, but you still want people around you,” Louisa explains. “I'm doing all these amazing things right now but I do get homesick.” There are flashes of Louisa’s personality in each of these songs, but it’s ‘Almost’, in which Louisa sings of things that seem tantalisingly beyond her grasp, that best reflects the decade she spent waiting for her moment in the spotlight. “It’s a song about how things don’t go where you need them go,” she explains, “and how for every one step forward you seem to take ten steps back.”

Flash forward to 2017 and Louisa’s only taking steps in the right direction, with the hits ‘Tears’ and ‘So Good’ laying solid foundations for a debut album set for release this year that fizzes with talent, ambition and massive tunes. And with that album pretty much finished, surely it’s time for Louisa to put her feet up for a bit? Don’t count on it. “I've got to where I wanted to be five years ago,” she grins, “but I'm nowhere near where I want to be five years from now. I’ve still got a long way to go, but I’m going to have the time of my life getting there.”