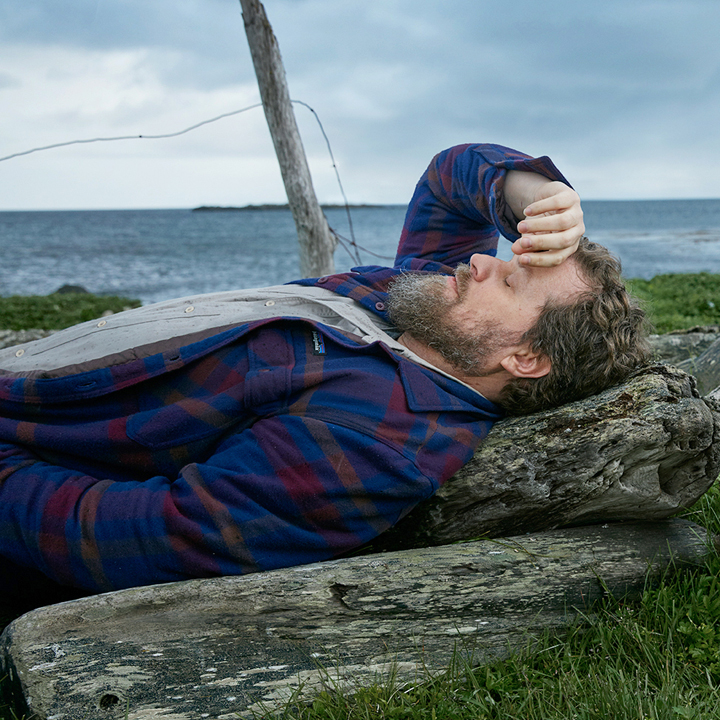 It’s been the most spectacular of journeys, from a place in time when John Grant feared he’d never make music again or escape a life of addiction, to winning awards, accolades and Top 20 chart positions, and collaborating with Sinead O’Connor, Goldfrapp, Elton John and Hercules & Love Affair. the fact he subsequently won a Best International Male Solo Artist nomination at the 2014 BRITS alongside Eminem, Justin Timberlake, Bruno Mars and Drake, seemed like some fantasy dreamt up in a moment of outrageous hubris. Just months later, the BBC’s request for a session with symphony orchestra provided (subsequently released by Bella Union as John Grant and the BBC Philharmonic Orchestra: Live in Concert), followed by Grant taking the Royal Northern Sinfonia on a UK tour, confirmed that it was simply the latest spectacular chapter in his personal and artistic renaissance

Grey Tickles, Black Pressure was recorded in Dallas with producer John Congleton (St Vincent, Franz Ferdinand, Swans) - coincidentally the same state of Texas where Grant nailed his 2010 solo debut Queen of Denmark in the company of Denton’s wondrous Midlake, after an enforced absence following the implosion of his band the Czars and a period of six years learning to live and survive without all his former crutches.

After that landmark return, which MOJO made its album of 2010, 2013’s Pale Green Ghosts was made in Icelandic capital Reykjavik (where Grant, a native of Buchanan, Michigan, later raised in Parker, Colorado, has lived ever since), which entered the UK Top 20 in its first week and ended up as Rough Trade Shop’s Album of the Year 2013, the Guardian’s No.2 and in MOJO and Uncut’s Top Five).  Such recognition, iced by years of sell-out shows across Europe and a recent US tour as special invited guest of the legendary Pixies, should allow the notoriously self-critical and insecure Grant the passing thought that Grey Tickles, Black Pressure will deservedly cement his reputation as the most disarmingly honest, caustic, profound and funny diarist of the human condition in the persistently testing, even tragic, era that is the 21st century.

“I do think the album’s great, and I’m really proud of it,” he says. “I wanted to get moodier and angrier on this record, but I probably had a lot more fun making it.” He cites “amazing” session keyboardist Bobby Sparks, “who really funked things up,” as part of that fun; likewise a month of Dallas sunshine “after a brutal dark winter in Iceland. and there was a lot of laughter.”

That said, fun isn’t the first ingredient you’d expect when you know the root of the album title. “‘Grey tickles’ is the literal translation from Icelandic for ‘mid-life crisis’, while ‘black pressure’ is the direct translation from Turkish for ‘nightmare’,” Grant explains, an unusually gifted linguist (he’s fluent in German, Russian and now tackling Icelandic). and then there is the album artwork, a stark portrait of a blood-splattered Grant wielding a blood-stained croquet mallet. “It’s what I feel like doing every time someone calls me a faggot”, he declares, “like Michael Douglas in Falling Down”.

Nevertheless, there are plenty of positive streaks in Grey Tickles, Black Pressure. Grant, for one, is in fabulous voice throughout and has moved on from the specific subject matter that shaped both previous albums  (though the concept of love always figures into the mix). “Disappointing” – featuring vocal guest Tracey Thorne – is an exuberant tribute to new love, against which Grant’s favourite Saturday Night Live comediennes, Russian artists and “ballet dancers with or without tights” pale in comparison. the album’s other two guests are vocalist Amanda Palmer and former Banshee’s drummer Budgie. Petur Hallgrimsson (guitar) and Jakob Smari Magnusson (bass) from Grant’s live band, and returning arranger Fiona Brice, complete what was a particularly happy studio family.

Even the album’s creative process was a triumph against adversity. Having had to include new material for the orchestral tour, John Congleton then asked that Grant turn up in Dallas with all the new material written. In spite of being exceedingly untalented in the art of time management AND the dark, brutal Icelandic winter which always takes a toll, “I got everything written in time,” he says.“And then it was all recorded and mixed in a month - which for me is insane, because I always want more time and I’m such an over-thinker. But I had to be finished before the Pixies tour. I intentionally put myself into that situation because I wanted to challenge myself, as I’ve done with every album.”

But the end result is indeed a moody, angry record, laced with levering humour and wounded pathos, yet as dark as Reykjavik in February. It starts and ends with spoken word snippets called, simply, “Intro” and “Outro”, both taken from the same Biblical quote (from 1 Corinthians 13) regarding the divinity of love that young John was taught in church. In between are 12 songs that document the reality of love on planet Earth, corrupted by “pain, misunderstandings, jealousy, objectification and expectations,” as Grant puts it.

Love corrupted is explored by the likes of the dreamy AOR-gasm “Down Here”, with its “oceans of longing, guessing games and no guarantees,” according to Grant. the funky Crisco-disco of “Snug Slacks” rails against those beautiful people – “the modern celebrity,” he says - who so unnerve him, forcing him “to have developed such a very high tolerance for inappropriate behaviour” as the lyric puts it. But there is hatred too. “You and Him” rails against those who’d crush all before them, from the profiteering US food and tobacco industries to property developers and those thugs who perpetuate prejudice and bigotry. the title track (name-checking Grant’s Uncle Paul, who did lose his arm in a corn thresher) posits that “children who have cancer” means we mustn’t indulge in self-pity. However, he notes, we must grin and bare it while waiting for death to take everything we’ve fought so hard to gain.

The twisting electro-rhythmic “Voodoo Doll” is a counterbalance, “for a friend who is far away in the throes of depression. I make a voodoo doll and do good things to it, even though things invariably gets messy!” If only Grant had such a benefactor when young, blushing uncontrollably with shame, “my skin turned inside out,” an awful memory brought to life in the simmering cauldron of “Magma Arrives”.

The album’s last two songs are among its finest. “No More Tangles” fights against co-dependency “with narcissistic queers,” he sings, through the metaphor of hair care products. “It’s about not apologizing for who you are and not putting up with unnecessary bullshit from people who do not care about you. Although my story is no more or less important than anyone else’s, at least at this point I can admit to being a human who deserves to be happy no more or less than anyone else.” But in “Geraldine” (as in the late Geraldine Paige, “one of freakiest, strongest, coolest actresses I’ve come across”), Grant’s latest actor-inspired song (following “Sigourney Weaver” and “Ernest Borgine”) is Grant’s chance to ask her if she too had to, “put up with this shit,” that life dishes out.

Ongoing health issues (not least of which is handling his HIV Positive status), still processing, “decades of brainwashing,” he says from a traumatic childhood, Grant still manages to keep fighting the good fight, and writing his way out of trouble with another fantastic record. “I want to continue to challenge myself,” he says. “To keep collaborating, to get the sound or the direction that will take me where I need to go. To keep taking the bull by the horns.”