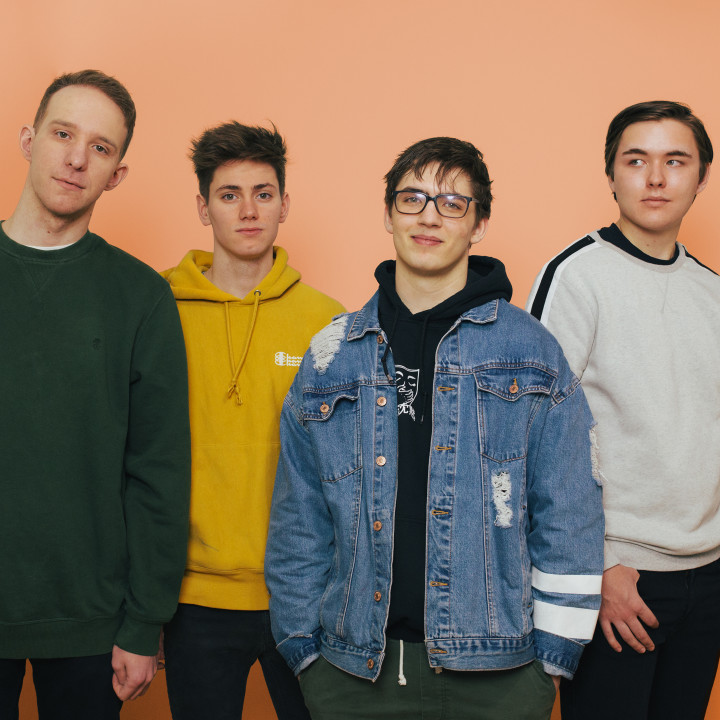 The day after FREDO DISCO gave up, it all changed.

In 2017, high-school songwriter Fredo Fosco (whose name, coupled with a case of iPhone autocorrect, begat the band's moniker) was posting songs to SoundCloud. His acoustic recordings -- later collected on 2017's school spirit EP -- were about as spartan as could be, simple voice memo renditions of songs that, despite their lack of polish and production-rich layers, were indelibly captivating.

"I didn't have access to fancy gear or studio time," Fosco says. "I just used the tools I had to record the songs I was writing. The EP was very representative of my life at the time"

Just a year later, virtually everything was different for Fosco. He was off at college studying business, while Fredo Disco had expanded to a full band -- gaining drummer Colin Riordan and guitarist Max King -- and released their debut LP, VERY COOL MUSIC FOR VERY COOL PEOPLE. Things had become fast-tracked beyond their dreams, but internally, Fosco felt the pull of increasing responsibility.

"It was becoming very difficult to manage both the band and school," he says. "I felt like I'd spent 18 years fighting the idea of what I was supposed to do, and I wanted to give college a shot."

He made the decision to put Fredo Disco on hold to focus on his studies -- but it turns out the universe had other plans. Literally the day after mothballing his music, a chance encounter on social media with his now-booking agent pulled him back in and emboldened his desire to pursue the band full-time. Just as quickly as it was gone, Fredo Disco was back.

VERY COOL MUSIC FOR VERY COOL PEOPLE , set for re-release by Public Consumption Recording Co., under Fueled By Ramen and the Elektra Music Group, on XXXX is a far sleeker, fleshed-out update on what Fredo Disco originally intended. The songs still carry the acoustic-based honesty and matter-of-fact, idiosyncratic lyricism of school spirit, but they're souped up with screaming electric guitars and full-band energy that puts Fredo Disco's blend of emo, pop-punk and indie rock more at home in sweaty rock clubs than teenage bedrooms.

But no matter how far away from Fosco's original vision the band gets, every song will still be rooted in the same core emotion that made his early SoundCloud recordings so captivating. They'll never lose the primitive, intimate feeling of a songwriter, acoustic guitar in hand, bearing his heart to a single microphone.

"These songs encapsulate who I am," Fosco says. "Above anything, I want this band to be human."