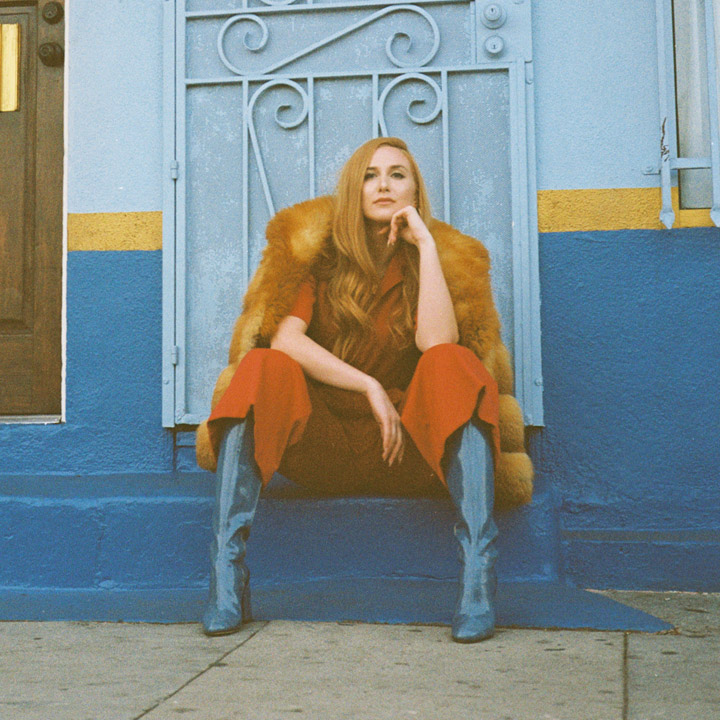 A few years before she eventually hit on a formula for forward-looking, multi-layered, emotional 21st century pop, signed with Black Butter Records and found herself on the precipice of greatness, Folly Rae travelled to LA. The idea was to make it in music but -- spoiler alert -- it didn't exactly go to plan. "I'd spent all money on flights," she remembers. "So when I landed I didn't have enough for hotel. I met someone who lent me her car, so I slept in that for a fortnight." One morning near the end of that trip, during which the whole 'making it in music' thing had proved unexpectedly grueling, Folly recalls waking up in that car and thinking to herself: "Next time I'm back here, I'll do things properly."

What a difference a few years makes. Early in 2018 this exhilarating new talent, with her spontaneous spirit and her penchant for powersuits, was back in LA, but everything had changed, and her years-in-the-making career was finally gaining traction. Having refined her musical vision she'd signed with the label behind Zara Larsson, Rudimental and J Hus, and Folly was now shooting the video for stylish revenge anthem Sniper with legendary director Emil Nava at the equally legendary Madonna Inn -- an idiosyncratic, unique and likeably rough-around-the-edges backdrop that seemed tailor-made for this passionate and expressive songwriter's unique twist on modern love. She had to go back to LA, she says: there was unfinished business. "Also," she adds, "that LA lighting really does wonders for a girl..."

Empowerment through heartbreak is the order of the day on You Don't Love Me, an EP inspired, Folly says, by her experience of "not being loved by someone, and all the different things that came with that." "When you come out of a break-up and realise you're on your own you either backtrack or you get strong from it and push yourself forward," she adds, and no prizes for guessing which route Folly took. Far from just another chancer who's shown up at pop's front door demanding VIP entry, Folly Rae's strength of spirit is exemplified by her sometimes circuitous but never less than focused route to where she stands today.

Folly was born in Hemel Hampstead but with Norwegian family on her mum's side, leading to numerous childhood holidays in one of Norway's most remote fishing villages, and she grew up surrounded by her dad's passion for soul and Motown, her older sister's penchant for P!nk, and her own early obsession with the Lion King soundtrack and the Spice Girls, which eventually (somehow) morphed into an appreciation of the warts-and-all storytelling of some of pop's strongest female voices, including Robyn and Joni Mitchell.

During her teens Folly trained as a classical dancer, where auditions would routinely also involve singing. Feedback was what we might call mixed. "Being told, again and again, that your voice is too unique, is quite dispiriting," Folly admits, "and I got it a lot. But around that time I started getting into Sia, and when I hear her sing I thought there might be a place for my own quirky voice." So Folly applied to Guildford-based music college ACM, where the course turned out to be 90% boring, which led to Folly skipping classes, which in turn meant that she was unceremoniously booted out after a year. This would have been the end for many artists but Folly had already been laying the foundations of a musical career that before long would see a huge level of early support from BBC Introducing, 1Xtra's Charlie Sloth and DJ Target, and Radio 1's Huw Stephens. "They had my back," Folly says of the tastemakers who backed her earliest releases. "I didn't have a label, or a manager, or anything. I had a cocktail bar job most nights, and usually two other jobs on the go at any one time, so going home and hearing myself on the radio gave me a push to keep doing what I was doing."

Slowly things started slotting into space. Further support came from Sticky Studios, the team behind artists such as Ed Sheeran and Paloma Faith; Folly appeared as a guest vocalist on Ghetts' Rebel With A Cause and recorded and toured with drum 'n' bass act Koven. And while all this was happening, she was searching for her own voice. It was a period of trial and error, she now recognises. "My logic had been: 'I love folk music, I love Joni Mitchell, I'll do that,'" she remembers. Of course, Joni and all the other artists who'd meant a lot to Folly only succeeded by using their own voices, not by attempting to approximate someone else's. "I know who I am now," Folly says of the musical transformation that began in 2016, started making sense in 2017 and is ready to explode in 2018. "The melodies and lyrics I started writing suddenly seemed to come from a stronger point: I felt like a stronger woman."

With that clarity came huge advances in Folly's sonic architecture, thanks to a lean team of collaborative kindred spirits including Danny Shah and Sky Adams (Gorgon City, Kylie, Sigma) and Tre Jean Marie (Craig David, Tom Grennan). "I didn't know how pop I was ready to be," Folly smiles. "Then we started to write Sniper and I thought, 'hm, maybe this could be something...'"

She wasn't wrong. The tracks that are gradually beginning to form Folly's debut album pair state of the art pop production with classic songwriting to devastating effect, and having spent her fair share of time waiting in the wings Folly Rae is now poised to take on the world. "Instead of writing from a sad or vulnerable place I learned to write from a place of strength," she says of her songwriting journey. "As I grew creatively and emotionally, I started to realise that if you've got your own voice, you'll always be heard."