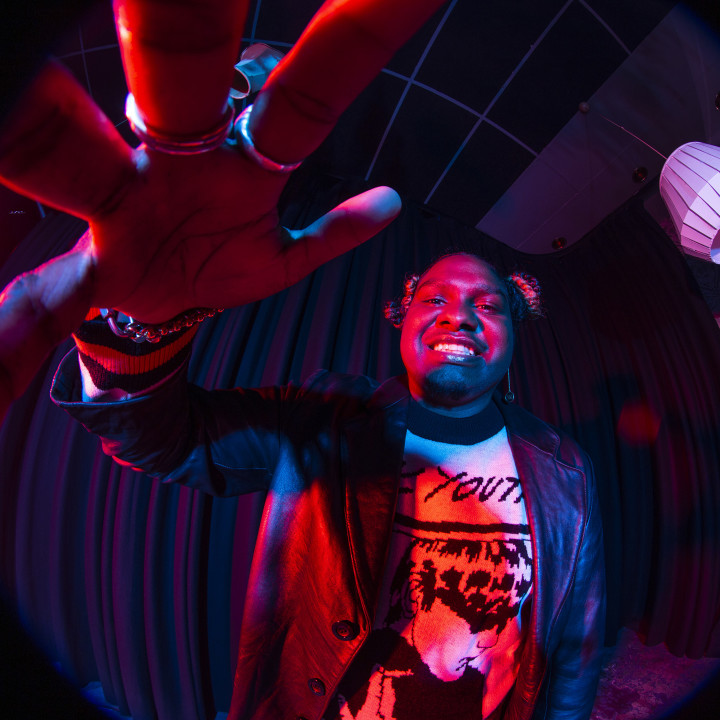 With his new single "Ride," Baker Boy is here to help you forget your worries -- even if just for a night. Let him pick you up from work, give you a spritz of cologne, pass you a plate of food, lead you down to the club. He and his friends will provide the music and the vibes -- you just have to stretch your legs, feel the beat, and give yourself up to the music. Feel that rhythm in your bones -- doesn't that feel better?

Born Danzal Baker, Baker Boy's small but beloved oeuvre thus far has always been about making listeners feel good, feel free, feel in tune with the rhythms of the world around us. But that's never been so explicit as on "Ride," a new collaboration with his cousin Yirrmal that demonstrates just how distinctive and evocative Baker Boy's music has become since he debuted with the instant-classic "Cloud 9" in 2017. Described by Baker Boy as "a new and improved version" of his 2017 Yirrmal collab "Marryuna" (#17 in that year's Hottest 100), "Ride" is the beginning of a new chapter for the Arnhem Land's fresh new prince, a marker of ascendance from rising star to supernova status.

Funky, soulful, and jaw-droppingly catchy, "Ride" is a party track lost to the annals of time, like an Off The Wall single re-recorded in Yolngu Matha. It's the brightest-burning party-starter in a catalogue made entirely of them. "I wanted to make a song that could bring people together on the dance floor, no matter who they are or where they come from," Baker Boy says of "Ride." "I'm driven by the vision that I have of people coming together, visions of positivity and fun and telling stories that people can relate to. That's the main message -- just bringing people together, no matter what your background, or how you dance, let's just get together and celebrate and I think that's powerful. We need more of that."

Written in a session with Yirrmal and longtime collaborator Dallas Woods and produced by Pip Norman, "Ride"'s ease and carefree groove reflects the tight-knit relationships of its collaborators. "It always feels really natural working with Pip -- we just talk and talk and the song usually starts from something we were randomly talking about, and next minute we've got a verse and I'm laying it down," Baker Boy says of the recording process. "We had Yirrmal there, and he came up with the really powerful and catchy chorus. Dallas was there as well and it was just a good party vibe -- everything we were writing about is how we were all feeling in the moment."

"I'm glad I got to collaborate with Baker Boy again and put that good Yolngu soul into 'Ride,'" Yirrmal says of making "Ride." "This song's about friends having fun, having good times every weekend. I wrote 'Ride''s chorus about my mob back here and when they want to go out. We see negative stuff around here, a lot of fighting, but with 'Ride' it's like come on, don't be shy, come to the town and let's dance. Let's be part of the team, think about the positive things and not the negative things."

"Ride" arrives alongside a typically exuberant music video, directed by Ryan Sauer. Featuring Baker Boy cruising down some of Melbourne's most iconic streets and letting loose in a packed nightclub, it's a perfect encapsulation of "Ride"'s warmth and spirit. "The video for 'Ride' brings the same excitement that the track does, it's all about the journey to the club and bringing people together," Baker Boy says of the film clip. "It was an amazing couple of days and was so exciting to see it come together. It was incredible collaborating with Aurie on the creative direction again, with Ryan, Harry and the crew really bringing the vision to life!"

"Ride" is the latest taste of Baker Boy's long-awaited debut album, arriving later this year and set to become the latest triumph in a career full of them, including six career ARIA nominations; an ARIA Gold certification for "Cool As Hell"; six wins at the National Indigenous Music Awards; an Order of Australia medal; the 2019 Young Australian of the Year award; and multiple placements in Triple J's Hottest 100. "Ride," with its indelible hook, speaks to Baker Boy's goal of being an inspiration to First Nations kids in rural communities: "Don't let that fear hold you back / Let the rhythm inside / I can see your face / what's the point tryna hide? / Your body's saying too much / come along for the ride."